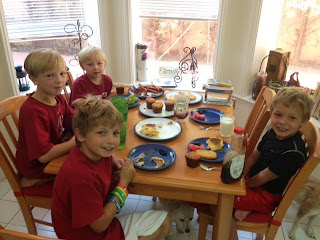 By Paul Koch at 9:09 PM No comments: Links to this post

By Paul Koch at 7:33 AM No comments: Links to this post

Martin Luther King – I Have A Dream | Section 778 – the bleacher seats
By Paul Koch at 7:29 AM No comments: Links to this post

By Paul Koch at 9:49 PM No comments: Links to this post

I am an absentee blogger. Yes, the busiest I have been in a few years these days, but there is no excuse for my absence. I haven't typed a word on my blog since July 13th - Bennett's birthday. I set some words down back in June for Devon's birthday too, and granted, those are probably two of the most meaningful posts - well, to me - that I have ever written. A full season with the Brockton Rox, a short tour of the big Island of Oahu with Tom and Lucy, a surprise coming home after many weeks away from Joanne and the boys, a new job, and a new classroom, the start of our new school year, the list goes on and on of solid, yet sadly neglected, blogging topics.

Eight weeks away from Joanne and the boys - not an absentee dad, but maybe an absentee daddy. Skype, Viber, Facebook - I guess I tasted the distance that our friends, loved ones, and first-class-mail-senders feel when they try to get in touch with us in China. It was a long time, the longest time we had ever been apart, and while I was hurting on the inside, I kept to the business of the Rox pitching staff, baseball camps, and our win-loss record, to ease my mind of it. But we were off for the 4th of July - too much time to think. I spent that week in Hyannis on Cape Cod with Ted and Sue, great friends, hundreds of beach goers, an obvious landlord and her Mandarin speaking housekeeper. Maybe weird, that was the only conversation I had in Chinese all summer. We beached everyday, ferried to the Vineyard for our vs Sharks games, and ate really good. Every day that week, we watched the Coming Home segment on ESPN - amazing - tears - God Bless America! A few weeks later I had my own.

We had an early game at the Vineyard and were back to Norwood - Ted's town, and that of Jake and Joe's Bar - by 5 or 6.

My phone buzzed beside the pitcher of beer on our table.

The screen showed the word Mommy above Joanne's photo; they were safely home. Finally we were back on the same continent.

"You think? Tonight?" I said into the phone. "Can we afford it?"

Jud, Ted and Sue, my summer roommates, coffee shop and bar mates, bosses, chauffeurs, and trusted friends, looked at me in disbelief.

"Are you serious? Go!" they seemed to cry in unison.

Joanne picked me up at the airport the next morning. Top down on Granny's car, coffee, no boys.

"Do they know I am coming?"

"Nope, they are going to freak."

Best hug of my life.


I rejoined the team later that week unsure how the players would take my absence from a few games. The Robbie McCunneys, GK7s, Papas, Cole Barlows, Driscolls, DJs, Sapps, Sheehans, Doonans, Gravys and Apos of the @RoxBaseball world only asked, "how was the time with the family coach?"

Those mentioned and all the others, what a fine bunch of men. We won some and lost some, but man did we have a good time. I feel blessed that I had one more summer opportunity to work with 30 young men with big dreams, dedication, camaraderie; nonetheless, I left them a few weeks later, for good. Absentee coach. Still a week to go in the season, but with Jud, Ted, Mike, the team, seeming to understand, Ted drove me to the airport. A quick one to DC, then a longer one to Honolulu and I was reunited with Joanne and the boys.

At that point, I was being an absentee new employee also. Being a fully present father though - sitting with my bride and watching our sons learn to surf on Kailua - was far more important. Hawaii, wow! We sat on the beach, swam, surfed, played in Tom and Lucy's pool, ate everything we were sure we would never see again once we returned to China, drank good wine.

China loomed nonetheless. I was absent from the new teacher, and returning teacher for that matter, orientation at ISB - the boys' school, my new place of employment. I had been hired earlier in the summer, via long distance interviewing and vetting, to teach 7th grade Humanities. Missing the start-up was weighing heavily on me, but far worse, I was driving Joanne to madness as I contemplated, concerned, and cried daily this new concept of regular work that I had been without for much of the last three years. I felt ill-prepared, late, absent - a feeling I have a bad taste for.

Joanne said, "Shut up! You will be great!"

So, here we are. Back in River Gardens, reunited family, the Rox season has ended, I am "Coach Koch" the teacher of 7-7 and 7-8 Humanities at ISB, The #DiamondDragons - our ISB varsity baseball team - is fully underway, and it is Friday night and I am writing on my blog.

I guess I am longer absent. Fully engaged.
By Paul Koch at 11:19 AM No comments: Links to this post