Thinking of you Meemaw, Bennett and I planted a few Sichuan pepper plants to watch over.  He is taking good care of them and looking for sprouts every morning.

The whole family is off to Shanghai on Thursday for baseball. 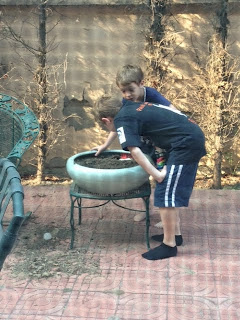 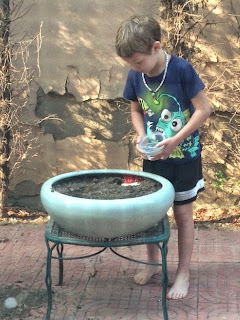 By Paul Koch at 8:17 AM No comments: Links to this post 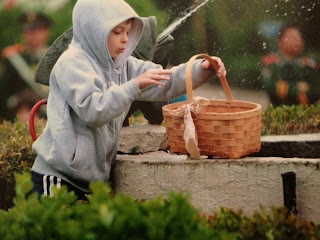 By Paul Koch at 5:45 AM No comments: Links to this post

“Hey, put your hat on right, look like a ball player."


A flat-brimmed, LA Dodgers, 5950 perched atop his head, like one of those little paper birthday caps with the snappy rubber neck string. “Dude, pull it down on your head,” I said, grabbing the brim of my own hat with my thumb and pointer to demonstrate.

"But what? You’ve watched a game before, right? Ballplayers don’t rock it like that."

"Coach, ehm, I know, I-I did watch some baseball games when I was in California, but, it’s just that-"

"Are you injured? Does your head hurt? It looks a lil small? Here let me -" I reach toward his head with the intent of showing him the way.

“No, no, no, it's not that coach," ducking away from my hand, hiding an embarrassed smile.
“Bro, what is going on? No one wears their hat like that.”

He lifts the hat and strokes his palm over his jet black head of hair.

“No-o,” he giggles, shaking his head.

“Concert? It is already seven o’clock, you're gonna be late?" I mean, I’d understand if he had to go to a strings concert, or a Monkey King production, or Probability Night, or one of the many other events that often pull Asia Pacific Athletic Conference athletes from practice. My mom probably wouldn’t want me messing up my hair before the concert either.

"Coach, it’s just that, well, it's conditioner, ya know.”

My eyes go wide - the are you for serious face - and I survey the rest of the team which has now gathered in a mid-practice huddle surrounding us near shortstop.

"Coach, I spend a lot of time conditioning my hair, and I, I just don’t want to mess it up." Again reaching up with his palm to smooth his bangs to his forehead.

“Wait, wuh?” My tone of disbelief - you’ve got to be kidding me, did you really just say that - which I am sure my students, players, and of course my own boys at home, know quite well.  I heard it, I know what he said, I just can’t fathom it.  I look like sarcasm.  I know they taught me not to do that on the first day of teacher school, but that lesson didn’t take so well, and "conditioner" is cause for sarcasm.

The rest of the 6th and 7th grade eyes in the huddle look back at me. A giggle or two and a couple of smiles emerge at the expense of our exchange, or probably at my foolish face of disbelief. Most of them though don’t seem nearly as surprised as I am by the hat, the hair, the conditioner, or even the discussion itself.

I drop my eyes toward the ground for a second, tapping the barrel of my fungo bat on the turf. Biting my lip to keep from breaking into laughter of my own, I shout, “pack it up! See ya tomorrow."

No doubt, they’re all wondering, without the guts to say it, “do you think my hair looks okay?”
By Paul Koch at 2:17 AM 2 comments: Links to this post